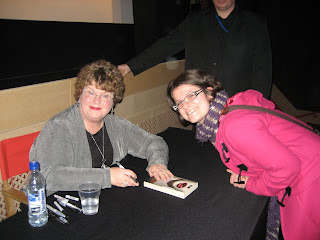 Okay so I haven't been writing in a while *sorry*. And I do have two articles on the front burner for the record.
I am just writing a quick note to say that last Tuesday, Charlaine Harris (the incredible writer behind the Sookie Stackhouse series for the ignorants among you) was in London at the Prince Charles Cinema in collaboration with Waterstones for a Q&A with her fans and book signings. We had a promotion clip of the second season of True blood too, but as most of  the other girls in the audience, I had already seen it! As you can see she signed my book (and I am not the headless dude in the back but the one in very sober and discreet pink and purple).
One word after this night: she is fantastic! When you look at her - and I don't mean to be disrespectful to people over 60 - you just think she's a sweet grandmother that you will gladly help out crossing the street. She has a sweet accent from the South (of the US that is) which just brings you to hot Louisiana with a glass of lemonade on the side.
But if anything, she is one kick ass grandmother! She is extraordinarily funny and energetic (you should have heard her tease the swooning girls in the audience with "well I actually touched Alexander Skarsgard"!). She was very humble, close and available to everyone (yes, I know, it usually helps on a promotional tour, but still).
Interesting info on this event: Vampire stories are owned by women writers, they are owned by female readers (only 5 guys or so in the audience), and they all vote for Eric !
(Eric being the hot blond vampire played by Alexander Skarsgard who is the on/off boyfriend of Sookie)
Writing
Charlaine has been writing for 27 years, and she became known worldwide by pratically everyone just a few years ago with the Sookie Stackhouse series, which were then transformed in the hit HBO TV show True Blood which made the story available to even more people. After a fan in the audience asked how she could manage to maintain this level of consistency in her writing for nearly three decades, Charlaine explained that it hasn't been easy being a woman writer for all these years, and that getting published was a hard task especially a few decades ago when fantasy and horror weren't popular nor mainstream genres at all. She had to fight her way to the top and stay there through hard work.
Sookie
Anyways, book 9 of the series ("Dead and gone") was published in 2009 and book 10 ("Dead in the family") is being published in a few months time. Charlaine didn't write just Sookie Stackhouse, and made a Harper Connelly series and a Lily Bard "Shakespeare"'s series which I will get started on reading soon and other books and novels.
For a list of the books in the order, check the Wikipedia page.
SPOILER ALERT ON FUTURE BOOKS!!
Charlaine revealed a few things about books ten and eleven of the Sookie Stackhouse series (her present contract goes to book thirteen, she doesn't know after), there will be faeries, there will be a half-elf, Quinn will make an appearance, we still won't know with whom Sookie will end up.
Charlaine promised repeatedly that Sookie will never be turned into a vampire.