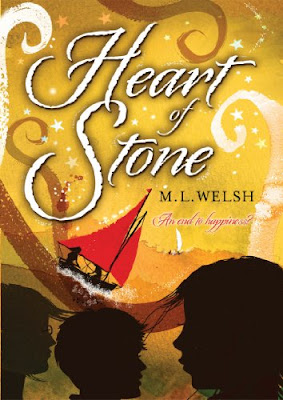 After a wonderful summer sailing, Verity Gallant just wants life to stay the same for ever. But as she should know by now, not everything in life turns out as we would like.
The land is shifting beneath the ancient harbour town of Wellow, causing mysterious caves to appear in cliff faces, terrifying rock falls and dangerous landslides. And the earth isn't the only thing crumbling... Verity is thrilled that Jeb has returned, but their feelings for each other threaten her friendship with Henry and Martha.
Once again Verity and her friends are embroiled in a tale of evil, intrigue and lost love, as a powerful force works its way towards Wellow, hell-bent on putting an end to all happiness. The Heart of Stone is the key, and the race is on to find it...
~~~
Heart of Stone is the second book in the Verity Gallant series, if you haven't read Mistress of the Storm, the first book in the series, find my review [here]. This review will have a couple of spoilers for the first book so don't read any further if you don't want to be spoiled!
I absolutely adored Mistress of the Storm so I was very excited to read Heart of Stone and very intrigued to see where the story would take Verity this time around. And I was not disappointed! The sequel is brilliant and Verity has become one of my favourite heroines!
This installment sees Verity, Henry and Martha face a new challenge as they start their school year. The land seems to take a life of its own and it shifts beneath their beloved Wellow. It is unveiling mysterious caves in cliffs and causing landslides and rockfalls. Sand also seems to spread everywhere and you can't do anything without finding some in the most unusual places. The population of Wellow also seems affected and people are unable to get any sleep because of nasty nightmares and the town is slowly disintegrating because of the land. But soon, our heroes discover that all these events aren't just a coincidence and that the disappearance of the Mistress of the Storm has caused an unexpected consequence.
I don't want to spoil the book for you guys so I won't say what this consequence is, but let me tell you that it will be as original, surprising and thrilling as the first book, if not more. It seems Wellow has been keeping more than one secret!
M. L. Welsh is delving more into the mythology she created in the first book surrounding the Original stories and we are getting a much better insight at some of the characters and stories. It also shows how original the whole setting is and I find it to be a refreshing story among all those doomy-gloomy apocalyptic books drowning bookshops these days. Not that this is all cupcakes and unicorns either as there are some chilling moments, but Wellow seems like such a beautiful and magical place just waiting to be explored!
The book is also about love and friendship and how these can go wrong during hard times. And hard times the characters face, as some invisible force seems to be determined to end all happiness in the world. I really love how positive the books are and how being friends is about what you go through together and how much you are willing to go through for what you feel is right. It doesn't hurt that there is a bit of romance in the story either. From eternal soul mates to first love, the romance fans (such as myself, that goes without saying) will really enjoy this book!
I could go on for hours about this book! With a fantastic cast of character, some thrilling adventure, a pinch of mystery and a budding romance, Verity Gallant's adventures are a must read!
Info: Books are perfect for teens and tweens (and adults clearly :) ) and for both boys and girls!
Thanks to RHCB for sending me this fantastic book for review!