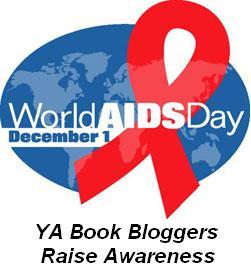 
Tomorrow is World Aids Day! Unfortunately, I haven't been able to organise a week like last year to raise awareness but you can go and revisit all the articles and reviews my fellow bloggers and I posted about HIV/Aids in young adult literature during the week (here)! We read books published in the 1970's and some more contemporary. Not only was reading a novel fascinating in itself, but seeing all those reviews also enabled us to see an evolution in how we perceive Aids.
There are now more people than ever living with HIV in the UK, according to the World Aids Day website, and increasing awareness on the issue is essential, especially to teenagers and young adults.
Here is the link to a non exhaustive bibliography of young adult novels talking about Aids/HIV which I compiled last year (do email me about books I forgot!). Reading a novel about HIV is a first step towards being aware of what the virus is but also how it feels like to live with it. People suffering from HIV often feel alienated because of misconceptions about how HIV gets transmitted.
If you have any interogations about HIV/AIDS, go over the World Aids Day website which gathers fantastic resources and links on the subject.
Have a lovely day :)
Caroline x
PS: I am currently reading Crossfire by Miyabe Miyuki for my Japanese teen novels week which will start next week.
Published by Caroline 1 comment:

Email ThisBlogThis!Share to TwitterShare to FacebookShare to Pinterest
Labels : HIV/AIDS in YA Literature Week, Young Adult 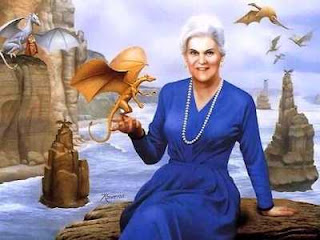 Anne McCaffrey 1926-2011
I have come back home to the saddest news. The wonderful Anne McCaffrey, author of some of the most imaginative pieces of speculative fiction written to this day, has passed away. Not only was Anne McCaffrey one of the most gifted fantasy and science fiction story-teller but she was also a true pioneer for women writer in the genre (she was the first woman to win a Hugo and a Nebula award) and an advocate for strong women characters.
Every single one of Anne McCaffrey books is set in an original and frighteningly convincing universe, filled with powerful ideas and dreamy characters. She created some of the most beloved species (I am still desperate to find a fire lizard) but has also brought us the most interesting human and not-so-human characters who taught us to be ourselves and to show compassion to others. There truly isn't any writer just like her and I will carry her unforgettable stories with me.
Thank you Anne for all the fascinating and inspiring books you brought us and I hope you are finding yourself surrounded with 'Dinis and fire lizards where you are now. You will be deeply missed.
Anne McCaffrey wrote those following words about the loss of Petiron and the lyrics couldn't be more fitting today:

“The tears I feel today I'll wait to shed tomorrow. Though I'll not sleep this night Nor find surcease from sorrow. My eyes must keep their sight: I dare not be tear-blinded. I must be free to talk Not choked with grief, clear-minded. My mouth cannot betray The anguish that I know. Yes, I'll keep my tears til later: But my grief will never go.” 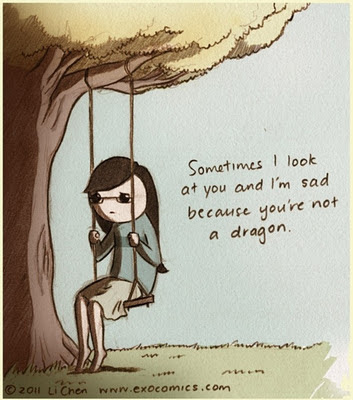 Me after discovering the Pern novels
Published by Caroline 5 comments: 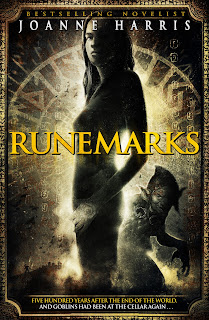 Hello book lovers!
Today I am deeply honored to welcome the one and only Joanne Harris on Portrait of a Woman to talk about her fascinating fantasy series of which the second book, Runelight, is out today!
Very different from her more contemporary novels, Runemarks and Runelight tell the tale of feuding gods, long forgotten prophecies and feature some feisty heroines.
~~~
Hi Joanne,

I have literally devoured Runemarks and Runelight in just a few days and have fallen for your fantastic characters (Loki!) and fascinating story! Thank you so much for answering a few questions about them!


Portrait of a Woman: I read on your website that you've always had a fascination for Norse Myths, but what attracted you to them at first?
Joanne Harris: I've liked them ever since I was seven years old, and read a library book called THUNDER OF THE GODS. 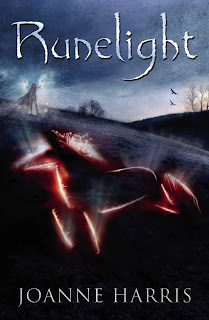 PoaW: If Runemarks was set in a very organised and regulated world, Runelight, which takes place three years after the first book, starts off in a chaotic, violent and grim setting - what can the reader expect from this new story and which challenges will await Maddy and the other characters?

JH: If RUNEMARKS was about self-discovery and the power of stories, RUNELIGHT is about finding out how we fit into the world, the power of friendship and community. Maddy has grown into young adulthood, and must now face the responsibilities of her new role among the old gods of Asgard.


PoaW: In Runelight, we meet Maggie Rede, how different a heroine is she from Maddy?
JH: The girls are in some ways very alike; independent, imaginative, strong. But Maggie has been brought up in the Universal City, among the Order, and her beliefs and attitudes have been shaped by her upbringing. In some ways Maggie can be very naive, and her fear of magic and of her own powers puts her into danger, both physical and emotional.


PoaW: How did you approach the writing process in Runemarks? Did you have to make a lot of research on Norse myths or learn runes?
JH: I didn't really do any specific research. My knowledge of Norse culture is the product of many years of interest and study; I've been learning Old Icelandic for 5 years, have a reasonably knowledge of runic systems and have brought a lot of what I've learnt into the books.


PoaW: Also, how different was writing Runemarks and Runelight from your other books? Do you plan on writing more fantasy books (not necessarily in the same world)?
JH: It's the first time I feel I've had the freedom to write out-and-out fantasy; imaginary worlds, alternate realities, other races; magic as a part of life. It's liberating to be able to do that, and on such a large scale; although I think that thematically my fantasy books and my mainstream books still have quite a lot of themes in common. Alienation; the outsider; tolerance; the power of words. There will almost certainly be at least one more book in the RUNE series - I'm having such fun writing these books that as long as people want to read them, I'm more than happy to keep writing them. 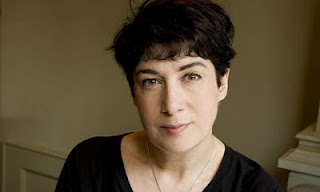 PoaW: Are there some aspects of Norse myths that you changed to suit the story or did you try to stay as close as possible to the myths?
JH: I have stayed fairly true to the original myths, but these stories are new, set in a post-Ragnarok world to reflect the changing roles of the gods in a society that has mostly forgotten their legends.


PoaW: Your interpretation of Loki is one of the best I have ever read and he is such a fascinating character in your books - which aspect of his famous personality did you want to put forward in the story?

JH: Loki is is such an ambivalent character - by far my favourite among the Norse gods - that I wanted to portray his complexity rather than (as most interpretations do) simply set him up as a villain. He's a very modern antihero in some ways; an outsider; rejected both by his own people and the community he inhabits and permanently conflicted about his role in the world. He's also a natural comedian - using his profound insight into human (and god) nature to find the best ways to ridicule and to upset his fellow-gods. And unlike the others, he is not a fighter; his weapons are not swords, but words. That's a theme that runs very strongly through both books; the power of words.


PoaW: The book has some very serious themes woven in the fantasy story - why did you want to illustrate the fact that "Not kings but historians rule the world"?
JH: We're back to the power of words again. I wanted to write about the nature of history and that of story, and how we, as a culture, are defined by what we choose to celebrate and the stories we pass onto the next generation.


PoaW: Last but not least, if you could invite one of the characters of Runemarks and Runelight, which one would it be and what would you cook?
JH: I'd invite Thor, who wouldn't care what I cooked (as long as there was a lot of it), but who I sense would be a fun drinking companion...
***
Stay tuned for reviews of Runemarks and Runelight on the blog if you haven't already been convinced to read them!
Where you can find Joanne Harris:
Website: http://www.joanne-harris.co.uk/
Follow me on Twitter: @Joannechocolat
Thanks a million to Joanne and RHCB!
﻿
Published by Caroline 1 comment:

I have read Eragon for the first time when I was 15 and I have been a massive fan of Christopher Paolini ever since!
Earlier this year I've been so *excited* (read: hysterical) about the upcoming release of Inheritance - the final book in the series that I have been consistently pestering every single person I know with it. I went to the event at Forbidden Planet (article and pics to come soon!) where I got my books signed and could meet Christopher!
I also have had the absolutely amazing opportunity to ask Christopher Paolini a few questions prior to the release of Inheritance (8th November people - only a week left!!!) and here is the video of the interview!!


Find out what to expect from Inheritance, if Christopher will continue writing , what he does when he has writer's block, which character from the Inheritance Cycle he would like to be, how different was writing Inheritance from the other books and his tips for aspiring writers!

Also, because I am a huge fan of his and I can't NOT share the amazingness that is Eragon's story, I have some signed books to giveaway!! 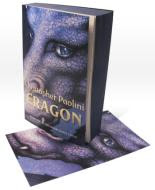 GIVEAWAY:
I have two sets of signed Eragon, Eldest and Brisingr with coloured edges to giveaway for 2 lucky UK and Ireland fans of Christopher Paolini!!!


A massive thank you to Christopher and the entire RHCB team for this interview!

Send me an email (here) with "INHERITANCE COMPETITION" in the subject.

If you spread the Inheritance Cycle love by blog, tweet, tumblr, facebook, etc. talking about Christopher or the release of Inheritance, do add the link to your email as you will get more chances to win!
(The email counts as 1 point, a tweet counts as +1, tumblr post as +1, etc.)

Add your name and address so that I can send the books to you as soon as I can!

Here are some links if you want to stay on top of all the Christopher Paolini news: