The Glorious Heresies by Lisa McInerney


One messy murder affects the lives of five misfits who exist on the fringes of Ireland's post-crash society. Ryan is a fifteen-year-old drug dealer desperate not to turn out like his alcoholic father Tony, whose obsession with his unhinged next-door neighbour threatens to ruin him and his family. Georgie is a prostitute whose willingness to feign a religious conversion has dangerous repercussions, while Maureen, the accidental murderer, has returned to Cork after forty years in exile to discover that Jimmy, the son she was forced to give up years before, has grown into the most fearsome gangster in the city. In seeking atonement for the murder and a multitude of other perceived sins, Maureen threatens to destroy everything her son has worked so hard for, while her actions risk bringing the intertwined lives of the Irish underworld into the spotlight . . .

Biting, moving and darkly funny, The Glorious Heresies explores salvation, shame and the legacy of Ireland's twentieth-century attitudes to sex and family.

I was completely engrossed in The Glorious Heresies and it's one of my favourite titles on the Baileys longlist and shortlist.

The story follows the lives of five characters in Cork who meet each other, ruin each other's lives and save each other. The book talks about Ireland's recent history, religion, traditions, sex and family. There is a lot to take in in this book. It is at times funny, at times utterly heartbreaking. The language is beautiful and often lyrical.

An interesting aspect of the interlacing stories was the different generations of the characters. This really put each story into perspective and showed some events in a new light.

The most striking thing for me was how much heart there is in the book. It's especially interesting to see inside the lives of characters from the fringes of society, ones who are usually dismissed and/or stereotyped - sex workers, addicts, drug dealers, killers.

This book is about life, the messy kind, the one you're given, the one you fight for. I loved it to bits and I can't wait to read what McInerney writes next. 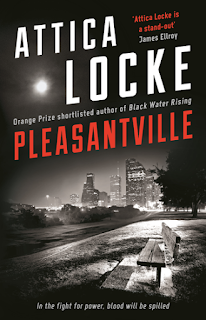 Published by Serpent's Tail, 2015
Longlisted for the Baileys Women's Prize for Fiction

In this sophisticated thriller, lawyer Jay Porter, hero of Locke’s bestseller Black Water Rising, returns to fight one last case, only to become embroiled once again in a dangerous game of shadowy politics and a witness to how far those in power are willing to go to win
Fifteen years after the events of Black Water Rising, Jay Porter is struggling to cope with catastrophic changes in his personal life and the disintegration of his environmental law practice. His victory against Cole Oil is still the crown jewel of his career, even if he hasn’t yet seen a dime thanks to appeals. But time has taken its toll. Tired and restless, he's ready to quit.


When a girl goes missing on Election Night, 1996, in the neighborhood of Pleasantville—a hamlet for upwardly-mobile blacks on the north side of Houston—Jay, a single father, is deeply disturbed. He’s been representing Pleasantville in the wake of a chemical fire, and the case is dragging on, raising doubts about his ability.


The missing girl was a volunteer for one of the local mayoral candidates, and her disappearance complicates an already heated campaign. When the nephew of one of the candidates, a Pleasantville local, is arrested, Jay reluctantly finds himself serving as a defense attorney. With a man’s life and his own reputation on the line, Jay is about to try his first murder in a case that will also put an electoral process on trial, exposing the dark side of power and those determined to keep it.

This is the first book by Attica Locke I've read and I can tell you it won't be the last! The book starts with the disappearance of a young girl who was volunteering for a local campaign. The circumstances of the disappearance seem familiar and politics soon intrude on the investigation.

I love all things political and the mechanics of power and this was everything I love about political thrillers and so much more. The setting was particularly interesting. I hadn't heard of Pleasantville before and the role it plays in the political scene in Texas. The book is set in the 1990s during a mayoral election and it was fascinating to see changes in the political landscape, which would go on to affect elections as we've witnessed them.

This book has a lot to say about times changing, about race, politics and people. The characters were all layered and complex. Right and wrong isn't clearcut, just as in real life. I loved reading about Jay Porter's moral compass and his doubts.

So much of the book speaks about events happening in the world today - black girls disappear and no one goes digging. It was so heartening to see Jay Porter's mission to bring justice to the parents of these girls and his fight against corruption. It's the social aspect of the book and the idea of justice that really made the book special for me.

If you're a fan of the politics and legal drama in The West Wing, The Good Wife and To Kill a Mockingbird, then you're in for a real treat! 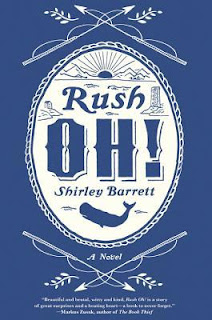 Published by Virago, 2015
Longlisted for the Baileys Women's Prize for Fiction

An impassioned, charming, and hilarious debut novel about a young woman's coming-of-age, during one of the harshest whaling seasons in history.


When the eldest daughter of a whaling family in New South Wales sets out to write about the particularly difficult season of 1908, the story she tells reveals itself to be far larger than she ever expected. As her family struggles to survive, and as she attempts to navigate sibling rivalries and all-consuming first love, nineteen-year-old Mary will soon discover a shocking side to these men who hunt the seas, and the truth of her own place among them. Swinging from Mary's own hopes and disappointments to the challenges that have beset her family's whaling operation, Rush Oh! is also a celebration of an extraordinary episode in history, when man and beast formed a unique, heartwarming allegiance.

I found Rush Oh! to be utterly charming. It gave me the same feeling I have reading Jane Austen or Dodie Smith's I Capture The Castle, with a lovely (if a little innocent and clueless) heroine recounting her early life and her first foray into love.

Mary is the eldest daughter of a whaling family and, with her mother gone, she is the one taking care of the household. She has to cook for her father's team of whalers and look after her younger siblings. Rush Oh! is Mary's account of a difficult whaling season and her meeting with a young man she has high hopes about.

The storytelling is beguiling. I loved being inside Mary's head and seeing her relationship with the whalers and others in the local village. The period is also an interesting one, foreboding changes in the industry and looking at how a small town can survive when its main industry becomes superfluous. Another fascinating point was how the whalers operated - helped by a group of killer whales, all with their different personalities.

My one slight niggling issue is that it's all from the point of view of Mary but at times she recounts episodes about which she couldn't possibly know every detail, which pulled me out of the story sometimes. That being said, it didn't completely tarnish my enjoyment of the book and I spent such a good time learning about whaling, the fascinating relationship between man and nature and following Mary's affections.

Definitely one to read if you love a down-to-earth heroine you can root for.
Published by Caroline 5 comments: