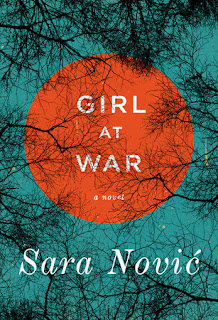 Girl at War by Sara Nović

Published by Little Brown, 2015
Longlisted for the Baileys Women's Prize for Fiction

Zagreb, summer of 1991. Ten-year-old Ana Juric is a carefree tomboy who runs the streets of Croatia’s capital with her best friend, Luka, takes care of her baby sister, Rahela, and idolizes her father. But as civil war breaks out across Yugoslavia, soccer games and school lessons are supplanted by sniper fire and air raid drills. When tragedy suddenly strikes, Ana is lost to a world of guerilla warfare and child soldiers; a daring escape plan to America becomes her only chance for survival.

Ten years later Ana is a college student in New York. She’s been hiding her past from her boyfriend, her friends, and most especially herself. Haunted by the events that forever changed her family, she returns alone to Croatia, where she must rediscover the place that was once her home and search for the ghosts of those she’s lost. With generosity, intelligence, and sheer storytelling talent, Sara Nović’s first novel confronts the enduring impact of war, and the enduring bonds of country and friendship.

This book was a real revelation for me and it shows how important prize longlists can be for bringing authors to the attention of readers. I had set out to read as much of the Baileys longlist as I could anyway, but Girl at War kept calling to me. I'm not sure if it's the book's European-ness that has appealed to me or if it's just the subject matter but I read it in two greedy sittings and I am already looking forward to the author's next book.

The book is set in two different times, one part with Ana as a 10-year-old when the Balkans war starts, and the other with Ana at college, being thrust back into her past and travelling back to Croatia. Ana's voice is so brilliantly woven between the two timelines that I still can't believe this is the author's debut novel. I was taken by Ana's voice from the start, and keen to witness what happened to her while she remembered her past.

I think it's a brilliantly written piece of fiction that highlights powerful themes. Especially with the anti-European and "anti-foreign" sentiments developing in the UK and the role of the UN getting severely criticised.

I loved following Ana when she goes back to Croatia and confronts what happened to her after years of quashing her memories. As a child she tried talking truthfully about what had happened to her but no one really wanted to hear. The reader can bear witness to the atrocities of this war by reading Ana's journey. 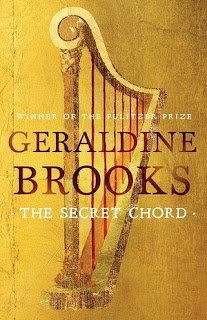 The Secret Chord by Geraldine Brooks

Published by Little Brown, 2015
Longlisted for the Baileys Women's Prize for Fiction

With more than two million copies of her novels sold, New York Times bestselling author Geraldine Brooks has achieved both popular and critical acclaim. Now, Brooks takes on one of literature's richest and most enigmatic figures: a man who shimmers between history and legend.

Peeling away the myth to bring David to life in Second Iron Age Israel, Brooks traces the arc of his journey from obscurity to fame, from shepherd to soldier, from hero to traitor, from beloved king to murderous despot and into his remorseful and diminished dotage. The Secret Chord provides new context for some of the best-known episodes of David's life while also focusing on others, even more remarkable and emotionally intense, that have been neglected. We see David through the eyes of those who love him or fear him - from the prophet Natan, voice of his conscience, to his wives Mikal, Avigail and Batsheva, and finally to Solomon, the late-born son who redeems his Lear-like old age. Brooks has an uncanny ability to hear and transform characters from history, and this beautifully written, unvarnished saga of faith, desire, family, ambition, betrayal, and power will enthral her many fans.

I don't read a lot of historical/mythical fiction (though I love history and myths, weirdly) and I never seem to seek out this kind of book but I'm always so happy when books like this pop up on a prize longlist, bringing them to my attention. I absolutely adored The Song of Achilles by Madeline Miller and though The Secret Chord didn't steal my heart in quite the same way, it definitely made me want to seek more books by Geraldine Brooks and more books in the same vein.

The Secret Chord is a retelling of the story of David (as in David and Goliath) seen through the eyes of his prophet Natan, but also through the stories of the people closest to him. Regardless of the religious aspect of the book, we can see how myths get built and a legend starts. I didn't feel taken by Natan's voice at first, feeling him quite emotionally detached from what he was observing, but as the story grew, and as his understanding of David developed, I loved the concept of Natan telling the story.

Natan is a fascinating character who channels prophecies through his body and rarely manages to witness them himself. He attaches himself to David as a young boy and serves as his prophet but also as his friend, being one of the few to be able to be honest with him. David is a flawed man whose decisions (and tragic flaws) impact on his life and the life of those around him. I very much enjoyed this brilliantly written and judged piece of fiction. 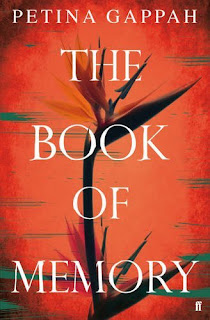 The Book of Memory by Petina Gappah

Published by Faber and Faber, 2015
Longlisted for the Baileys Women's Prize for Fiction

Memory, the narrator of The Book of Memory, is an albino woman languishing in Chikurubi Maximum Security Prison in Harare, Zimbabwe, where she has been convicted of murder. As part of her appeal her lawyer insists that she write down what happened as she remembers it. The death penalty is a mandatory sentence for murder, and Memory is, both literally and metaphorically, writing for her life. As her story unfolds, Memory reveals that she has been tried and convicted for the murder of Lloyd Hendricks, her adopted father.

But who was Lloyd Hendricks? Why does Memory feel no remorse for his death? And did everything happen exactly as she remembers? Moving between the townships of the poor and the suburbs of the rich, and between the past and the present, Memory weaves a compelling tale of love, obsession, the relentlessness of fate and the treachery of memory.

There is a type of book that takes hold of you from the first few sentences and keeps you reading and invested in the story throughout. The Book of Memory was this kind of book for me. Petina Gappah's writing was quietly sublime; I was in Memory's head from the start and was fascinated to read her story.

The story is told through a diary Memory starts while in prison, accused of murder. Memory is an albino woman who grew up with her parents and sisters before being "adopted" by Lloyd, a white man, when she was young. It is Lloyd whom she is accused of murdering, and in her diary she recounts the events leading up to her imprisonment.

The prose is powerful and the voice strong. Though I finished the book a few weeks ago, I still think about the story and about Memory's life in prison, and what it must have been like growing up as an albino woman in Zimbabwe. What really shone through the book was her feeling of always being the odd one out and never feeling like she fit in. This is the author's debut novel, but she has had a bunch of short stories and essays published, which I'll be looking out for.
Published by Caroline 4 comments: