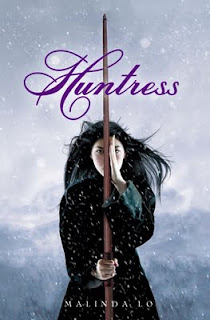 Malinda Lo is one of those writers who speak directly to my soul. I honestly don't know what I would do without her books.
(what do you mean "over the top, much?" :D)
Summary from Amazon:

Nature is out of balance in the human world. The sun hasn't shone in years, and crops are failing. Worse yet, strange and hostile creatures have begun to appear. The people's survival hangs in the balance. To solve the crisis, the oracle stones are cast, and Kaede and Taisin are picked to go on a dangerous and unheard-of journey to Tanlili, the city of the Fairy Queen. Taisin is a sage, thrumming with magic, and Kaede is of the earth, without a speck of the otherworldly. And yet their two destinies are drawn together during the mission. As members of their party succumb to unearthly attacks and fairy tricks, the two come to rely on each other and even begin to fall in love. But the Kingdom needs only one huntress to save it, and what it takes could tear Kaede and Taisin apart forever...
~~~

Huntress is set in the same world as Ash but takes place some eons of time before.  Huntress's setting though has some clear Chinese influences in terms of cultural and religious aspects. If you haven't read Ash (*gasps* Seriously? What are you waiting for?) and want to read my review, head over here.
I really felt that the setting was very important in this book and that it grounded the plot and the characters. Malinda Lo is a very strong advocate of Diversity in YA and not only does the book touch LGBT themes but it has also some feminist and POC aspects.
The characters in this story all have their different stories, experiences and outlook on life. Kaede is the daughter of the King's Chancellor and has a path already prepared for her where she marries a rich important man to secure stability in the Kingdom. But Kaede doesn't want to get involved in politics and get married to a man she hardly knows (*cough* to a man, period. *cough*). She wants to choose her own life and keeps opposing herself to her father.
Taisin comes from a very modest family and only owes her place in the Academy thanks to her extraordinary gifts. She is very talented and dedicated to become a sage.
The secondary characters also have their personalities and their own inner struggles. I liked Con, the King's son, who, having spent time in the army with trusted soldiers, knows how to take care of himself and his people, as well as Shae who is a badass warrior despite being a woman (that is no me being sexist, it is the general idea in the book).

The Kingdom is organised as a patriarchal society (aka ruled by those little things known as "men") from what we can gather from the beginning, and even if some strong female figures exist in the Academy as sages, they are magically gifted. The society isn't big on homosexuality either, in case you were wondering. So a very important part of the story is that Taisin and Kaede are both fighting social conventions (kapow!) to be something which doesn't exactly exist and which they don't know they can reach. Slowly, they realise that everything that have been fed to them by everyone since they were children doesn't apply to the reality before their eyes and doesn't prepare them to anything they will have to confront. And no matter how hard the situation is (may it be going to the Xi or understanding they feeling) they cannot not fight this fight.

That is why I really loved the romance part (yes, that is really me saying that :) )! You really could feel Kaede and Taisin's feelings for each other grow every day more. It started as a tiny spark and kept growing as their mutual respect and admiration for each other grew. Their story was very sensitively portrayed and it didn't distract the reader too much from the main action of the book nor did it seem too boringly romantical.
In the book, the main fairy characters are the Xi who are a type of Elf/Fairy/You-Name-It who live eternal lives, have very developed magical skills and are very close to nature. Their personalities are very much in line with their species' characteristics so it felt realistic (as realistic as fantastical creatures in a fantasy world can get). It was also interesting to see the human characters discover the contrasts between the two species. The fantasy aspect is also not too heavy so non-fantasy fans can read this without risk of sudden death.

Malinda Lo has fantastic story-telling skills and I really loved the fact that the story took some very unexpected paths and didn't go the way I anticipated it would go. The story uses a third person narrator who goes in the head of all characters.
Colour me partial but this is definitely my kind of book through and through. I love the style of writing, the story, the characters and the setting. I really want to read more about Kaede and Taisin (and it does feel like a sequel might be possible)!
Huntress by Malinda Lo | May 2011 | Read on my kindle.
Published by Caroline