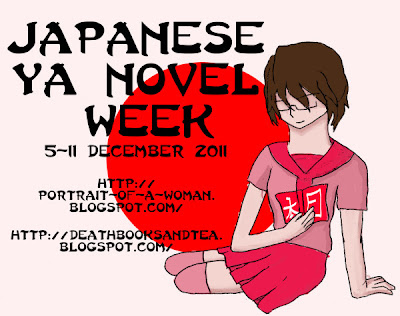 I am reviewing this book as part of the Japanese YA Novel week I am co-hosting with Nina at Death Books and Tea.
If you would like more information about the week, head over here.
~~~ 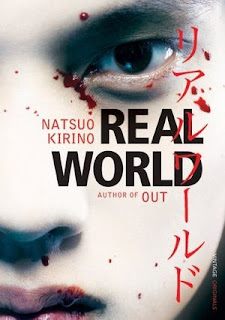 Summary from Amazon:
In a suburb on the outskirts of Tokyo, four teenage girls drift through a hot smoggy August and tedious summer school classes. There's dependable Toshi; brainy Terauchi; Yuzan, grief-stricken and confused; and Kirarin, whose late nights and reckless behaviour remain a secret from those around her.
Then Toshi's next-door neighbour is found brutally murdered and the girls suspect Worm, the neighbour's son and a high school misfit. But when he disappears (taking Toshi's bike and cell phone with him) the four girls become irresistibly drawn into a treacherous vortex of brutality and seduction which rises from within themselves as well as the world around them.
~~~

Real World is a small book which creeps up on you. The story is in turns narrated by four teenage girls: Toshi who always wants to do the right thing, the intellectual Terauchi, Yuzan who is trying to overcome the grief after her mother passed away and who has to deal with her homosexuality and Kirarin who isn't a sweet innocent girl as she would like to let on. Toshi's neighbour gets killed and the teenage girl thinks she knows who did it: the woman's son, Worm. When Toshi's phone and bike are stolen by Worm and he contacts the four girls, a psychological thriller develops as he tries to plays one girl against the other and as each girl tries to play him.


The book is as much about the murder of Worm's mother as it is about the teenage girls. Natsuo Kirino's talent is to really get those teenagers in all their angst and boredom and how they build a world around them to shroud their real selves. While reading, you get a strong sense of discrepancy between the girls' "social" self and what you can hear inside their heads. You do wonder how those four very different girls could ever be friends, but they have at least in common the masked personality and a willingness to hide it. You get a real sense that no matter how different those 5 teenagers are, they share the same culture and a lot of beliefs.


The book is quite haunting in the sense that you want to shout to the girls to stop playing with Worm, or to Worm to get a life, but you can only stand and watch while they continue getting deeper and deeper. You don't really understand if this attraction the girls have for Worm is a mix of fascination for violence or boredom, but you realise that the four girls are a bit more than they let on to the others and not as naive as one might think. Each girl has her own issues and they are all trying to fight society's expectations in them and get away from the conformity that is demanded of them.. You can see their curiosity to the outside world and how they just want to get out of the boxes they live in, no matter how comfortable those boxes are.


Worm is as affected by people's expectations as the girls are and even imprisons himself in them when he wants to give a meaning to what he did. Japan isn't a stranger to those crimes and there has been some anxiety in the country over a possible youth crisis where teenagers would lean to violent behaviours because of the rigidity of the school system.


The writing is very good and you can't even tell this is a translation of a work originally written in a foreign language. I have read this more than six months ago and I can still remember what I felt when I read this book.


I definitely recommend the book in general to people who are interested in Japanese culture because there are some very interesting scenes about the girls' lifestyles in there, but fans of noir fiction/psychological thrillers will definitely fall for this book.


Info: There are some violent and upsetting scenes in the book so I wouldn't recommend the book to anyone under 14 years old.
Published by Caroline