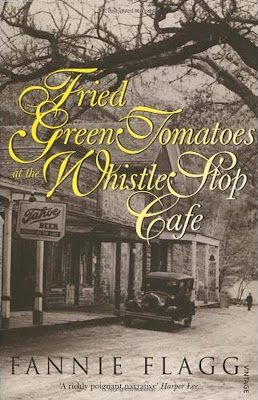 The day IdgieThreadgoode and Ruth Jamison opened the Whistle Stop Cafe, the town took a turn for the better. It was the Depression and that cafe was a home from home for many of us. You could get eggs, grits, bacon, ham, coffee and a smile for 25 cents. Ruth was just the sweetest girl you ever met. And Idgie? She was a character, all right. You never saw anyone so headstrong. But how anybody could have thought she murdered that man is beyond me.


Fried Green Tomatoes at the Whistle Stop Cafe is a mouth-watering tale of love, laughter and mystery. It will lift your spirits and above all it'll remind you of the secret to life: friends. Best friends.

Fried Green Tomatoes at The Whistle Stop Cafe intertwines different narrators to tell the story of the little town of Whistle Stop and its infamous Cafe. Set in the South of America, the story touches various themes including racism, economic migration, homosexuality, growing up and old, feminism and disabilities. The Threadgoode family is one of the big families living in Whistle Stop and are supportive of their African-American neighbours, even when the Ku Klux Klan threatens them. Idgie (Imogen) and Ruth open the Whistle Stop Cafe and most of the towns activity revolves around it from then on.


In the 1980s, Evelyn Couch is an unfulfilled stay-at-home mom who takes to binge-eating because of how she feels. She meets Ninny, a retired old lady from Whistle Stop, who tells her the amazing story of her town. By those discussions, Evelyn gets a new insight of herself and wants to be more assertive and actually make something of her life.
Ninny tells the story of the Threadgoode and in particular of Idgie and Ruth who seemed to be accepted as a couple in the town and who raised Ruth's son together. As a background story, Ninny talks about Ruth's ex husband who suddenly disappeared and whose alleged murder should have been committed by Idgie. This gives a bit of a suspense quality to the book because you only find out at the end what really happened!
The book also features some funny snippets of the Whistle Stop gazette from the opening of the cafe to its closure. These are awfully entertaining, I was laughing out loud more than once while reading them!


I found that the various narrators worked well and gave another dimension to the story. I also liked that a large part of the story is told by people who witnessed what was happening and Ninny, in particular, loved Ruth and Idgie so much that she might be fudging a bit the details. The narrators are not exactly reliable and some characters or events are clouded with mystery so it gives an interesting edge to the story.


You might also want to have some snacks next to you while you read because food is a large part of the story and the Whistle Stop menu is quite simply mouth-watering (well, except for one exception, but you will have to read the book to know why!). There are also all the recipes at the end of the book in case you just give up on snacks and want to try them yourself!


The story in general is very rich and I think it's the type of book where everyone gets something different out of it. I personally picked up more on the women issues and being able to compare Evelyn's life with Idgie's or Ruth's but you could see the book as one centered on the question of race, or economic changes during the XXth century. I found that the various dimensions gave a real originality to the story.


The style differs because of the various narratives, but Ninny's voice is pitch perfect. After a few lines, I could hear a Southern accent reading the lines in my head and I could feel the heat and the atmosphere. You will definitely get your share of travel and discovery, reading this.


I've read the book for my Queer Book Group and the discussion was quite lively. Some people didn't like the different narrators and how you had to keep on reading the book to actually find out everything about Ruth and Idgie. The book is set at the beginning of the century all though the XXth century and some argued that Ruth and Idgie's relationship was never officially acknowledge anywhere in the book (so they *could* potentially just be friends) whereas the book was published in 1987. That issue was probably the biggest theme discussed by everyone in the group (were they together? Was the omission to fit in with the historical period? Was it to be more for commercial reasons?...). It's quite interesting that whenever you discuss a book, it's always the negative which comes out more.


I really loved it and even if when I discussed it with the book group I realised the story had some flaws, I thought it was a great book and I'd definitely recommend it!


Fried Green Tomatoes At The Whistle Stop Cafe, by Fannie Flagg | 1987 | Vintage | Bought at Gay's The Word
Published by Caroline