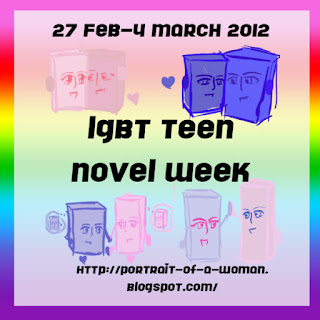 This review is part of the LGBT Teen Novels Week, hosted here.
For more information about the week, head over here.

Please welcome Kirsty from The Overflowing Library
for this guest review of the Adult/YA crossover novel
Becoming Nancy! 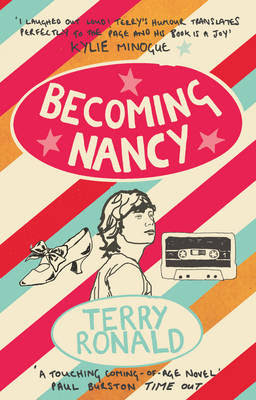 Summary from Amazon:
For David Starr, being cast as Nancy in the upcoming school production of Oliver! is quite a shock. But David is up to the challenge. Living in a three-bedroom semi in 1970s' working-class East Dulwich, surrounded by his somewhat colourful relatives, he is bright, smart-mouthed, fanatical about pop music and ready to shine. Rehearsals begin, and he strikes up a friendship with the handsome yet enigmatic Maxie Boswell, captain of the school football team. As their alliance deepens it appears they might become more than just good friends, but that can't be right, can it?
Discovering a confidant in empathetic teacher, Hamish McClarnon, and spurred on by his no-nonsense best friend, Frances Bassey, David takes on the school bully, the National Front, and anyone else who threatens to stand in the way of true love.
Vibrant, warm, and full of life, this uproarious and touching coming-of-age novel, set against the backdrop of South-East London in the thrill of the late seventies, will transport you straight back to your first music obsession and the highs and lows of your first love.

I must admit this isn't a book I normally would pick up. I read very little adult fiction but was pitched it for review saying it was very much a cross over novel and I agreed to give it a go and I'm so glad I did.I thought David was a brilliant character. We met him as he has just about come clear in his mind about his own sexuality and follow him as he comes out to his friends an family. I though he was really warm and geniune and loved the relationships he had with the people around him.I loved David's teacher/gay role model Hamish. I loved that in him David saw the man he could become ... one that was both comfortable with his sexuality but also quite happy to take on anyone that dared to give him grief about it or harrass others. You can certainly see his influence as David grows as a character and becomes more comfortable in his own skin.I loved this historical setting (yes I know people would disagree and say it isn't historical yet but I studied the time period as part of my History degree so I'm going with it). I liked seeing the attitudes and ideas that were prevalent at the time especially when you consider it is set about the same time as the brixton race riots and only a few years after homosexuality was no longer considered a crime in the UK.What I loved about this book is that is was very much a book with a story to tell - teenage boy in the 1970s who after coming out as gay has to deal with a huge amount of grief from other parties who treat him horribly because of their bigoted and homophobic view points which it does well. However it does it in such a brilliant way that it doesn't come across as odd or patronising. As a word of warning to my younger followers who are considering reading this. There is a lot of swearing in this book and there are scenes with sexual content which are quite graphic so maybe not one for younger teens / tweens.To sum in in short it's like a gay, less irritating and wittier Adrian Mole. I throughly enjoyed it as a heart-felt coming of age story with a brilliant morale and story to tell set in a modern history backdrop. Brilliant.

Thanks Kirsty for this wonderful review!
Published by Caroline