Launched in 1996, the Prize is awarded every year to celebrate women's writing around the world. The judges this year were Helen Fraser, Mary Beard, Denise Mina, Caitlin Moran and Sophie Raworth.

I used to only look at the shortlist but I've read so much and so much more varied books since last year that I'm actually incredibley excited about this year's longlist and have quite a few of my favourites I was expecting to be part of the list and others whom I wasn't expecting.

This year is also the year to read women writers (#readwomen2014) and the longlist for the Prize is the perfect source of inspiration if you're planning to read more women writer and are not quite sure where to start. I have to admit I generally read more books written by women (out of the 16 books I've read so far this year, 10 were written by women) but I'm always keen to discover new authors.

What do you think of the longlist? 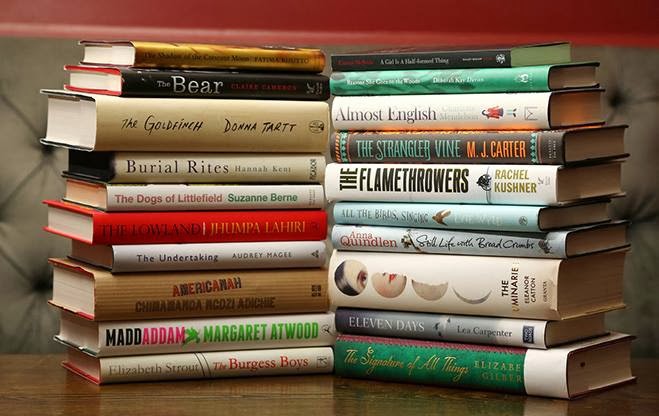 I've only read The Luminaries and I've had on my radar Americanah, Burial Rites, The Flamethrowers, A Girl is a Half-Formed Thing, Almost English, All The Birds, Singing and The Goldfinch of course so I'm looking forward to read those and discover the other authors from the longlist.
Published by Caroline

Email ThisBlogThis!Share to TwitterShare to FacebookShare to Pinterest
Labels : Prizes