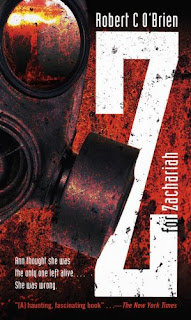 I read Cormac McCarthy's book The Road a few weeks ago and it reminded me of a YA book I read last summer: Z for Zachariah by Robert C O'Brien. The author died while writing the last chapter and his family finished the story and published it in 1973.
Z for Zachariah is part of the non-ambitious and very modest "25 Best YA Fantasy Novels of All Time" list (here) which I found one day googling. I immediately tracked down and bought the book as the very obedient and book-obsessed person that I am.

The book is written as the journal of teenager Ann Burden, who ends up living by herself in the family farm after *something nuclear* happened and everyone disappeared (as in end-of-the-world-they-all-died disappeared). She fares pretty well for the last woman on Earth in her little valley with its microclimate (hence why she survived and the others didn't)  growing her own vegetables, taking the water from the only river fit to drink, taking goods from the local supermarket, etc.
Until one day (drum roll), she sees someone arriving in her valley. A man.
So all the hopelessly romantic people can stop 'awww' right now since nothing romantic happens between the last woman and the last man on Earth. On the contrary actually, it isn't anywhere near joyful or optimistic.

This book has a cool pacifist-environment-friendly vibe which I like. And it is the type of books where the hidden feminist in you screams *yay* for the heroine kicking some man butt (admit it, you read the Hunger Games and thought "Yeah, who's the man, now?"). Though I did find the story a little too black-and-white at times with nice-Ann and evil-Mr Loomis (because that's his name). But the idea is definitely interesting and the writing is nice.
*And the end is really really cool but I can't tell you why*
The cool thing, which is in The Road too, is that you don't really know what happens or how it happened,  you just see those characters going on as if there was such a thing as hope in their situation.
Which I find personally very inspiring.