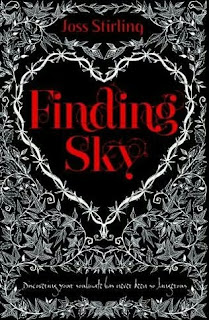 Publisher: Oxford University Press
Release Date: October 2010
Category: Young Adult/Paranormal Romance
Source: Sent to me for review by OUP
Paperback: 308 pages
Summary from Amazon:
You have half our gifts, i have the other . . . When English girl Sky, catches a glimpse of bad boy Zed in her new American high school, she can't get him out of her head. He talks to her with his thoughts. He reads her mind. He is the boy she will love for ever. Dark shadows stalk her past but a new evil threatens her future. Sky must face the dark even if it means losing her heart.
~~~~~~
I have to admit that when I first received the book, I anticipated not liking it, thinking it would be yet another cliché in the paranormal romance genre. Oh boy was I wrong. I was hooked from the first chapter and read it in one sitting. I absolutely love being surprised by a book, and this one is no exception.


The story is told from the point of view of Sky who has been abandoned in a parking lot when she was six years old. She obviously had a terrible life before settling in with the Brights at ten years old. You get this feeling of a dark shadow hovering over Sky's personality but you don't know until the last part of the book what it exactly is. She is a very interesting character moving to a new city in another country where she has to be someone new - again. I know that it sounds a bit familiar, but it really feels new. She is quite immediately attracted to Zed who is the school bad boy, but she doesn't feel like he's her soul mate or that they are the two halves of the same whole etc. She feels attracted to him at first and that's it. She does obsess a little about him too in a harmless stalking kind of way, as any teen would do. (I have come to realise that there is nothing more dangerous in this world today than a teenage girl with a crush...)


I like the characters, both main ones and secondary, there is a nice balance between them and they are all very well described and original in their own way. I like to have a feeling that the world doesn't revolve around 'jocks', 'cheerleaders' and 'nerds' and that the ones in the middle are actually the most interesting to read about. The world isn't black and white, you'd be surprised at what the shades of grey have to offer.
The adult characters are pretty cool as well, they are not perfect but not the impersonation of an evil egotistical demon either and they are pretty interesting from the arty Brights to the outdoorsy-sporty Benedicts.


The paranormal aspect is pretty ace. One of my biggest pet peeves in this genre is the coherence of the paranormal element with the story as well as in general. Here, it makes sense though it is not something we encounter a lot (you know, like vampires and shapeshifters). It raises enough interest and fascination without having to explain the whole history and biology behind it all. There is a lot of action and I loved the paranormal related events.
The romance is good! Which you never hear me say (or read me write rather?) often. I felt exactly the same emotions I experienced when I read my very first paranormal romance: I was curious, I empathised with the characters and mainly thought "awww" the whole time.


The writing is very good, absolutely flawless, it creeps on you from the first pages and you feel like you can't put the book down before finishing it, and when you're done, you will patiently wait for an eventual sequel to get your fix. There are quite a lot of references to popular culture in it and it really helps feel connected to the story and the characters. The setting is very important to the story and there are quite a few descriptions of the mountains. I really wish I could go there, it seems like a terrific place.

All in all, Finding Sky brings you the best from the paranormal romance genre, without relaying too much on the boring incredible beauty of its characters, the eternal timeless forever and ever romance (yawn) or some hardly coherent paranormal powers. A perfect balance for an amazing story. fans of the genre will definitely love this new addition and non-fans could definitely fall for this story. I can't wait to read other books by Joss Stirling, she definitely rocks my paranormal socks!

Thanks to Liz and Oxford University Press for sending me this!!
Published by Caroline