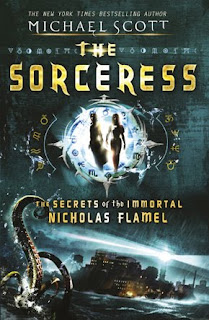 Title: The Sorceress
(Book 3 of The Secrets of the Immortal Nicholas Flamel)
Author: Michael Scott
Publisher: Corgi Books (Random House Children's Books)
Category: YA
Release Date: 2009
Source: Sent by Random House for review
Paperback : 483 pages
Summary from Goodreads:
Nicholas Flamel's heart almost broke as he watched his beloved Paris crumble before him. The city was destroyed by Dee and Machiavelli, but Flamel played his own role in the destruction. Sophie and Josh Newman show every sign of being the twins of prophecy, and Flamel had to protect them and the pages from the Dark Elders.
But Nicholas grows weaker with each passing day. Perenelle is still trapped in Alcatraz, and now that Scatty has gone missing, the group is without protection. Except for Clarent—the twin sword to Excalibur. But Clarent’s power is unthinkable, its evil making it nearly impossible to use without its darkness seeping into the soul of whoever wields it.
If he hopes to defeat Dee, Nicholas must find an Elder who can teach Josh and Sophie the third elemental magic—Water Magic. The problem? The only one who can do that is Gilgamesh, and he is quite, quite insane.
~~~~~~~~
I cannot review The Sorceress without giving spoilers to both The Alchemyst (review here) and The Magician (review here), so don't read what is below if you haven't read the two first books in the series!
In this third book of The Secrets of the Immortal Nicholas Flamel series, Nicholas Flamel, Josh and Sophie head over to London after narrowly escaping the evil John Dee and Niccolo Machiavelli in Paris. Even though London belongs basically to the Dark Elders, it is the only place in Europe where there is a Master of the Water element. Josh and Sophie are now both Awakened and they need to be able to control this element.
The fact that Josh is finally Awakened makes him, in his mind, equal again to his sister. The power they have unleashed together in Paris clearly points out, if there remained any doubt, that they are the true Twins of legend: "the two that are one and the one that is all". I am now repeatedly amazed by the changes in Josh's personality. From being a powerless whiny character in the first book, he is now opening up to his true self and gaining in power and strength. The fact that Mars Ultor, the bannished Elder, has given him the gift of strategy makes him an undeniable strength in their group when he can analyse all dangerous situations with calm. It is fascinating also to see Josh interact with the Coward's Blade Clarent (Excalibur's twin). I can't wait to read more about those blades in the future books.
The twins also start to be more independent, now that they are powerful. They want to know why they are fighting and for whom, not blindly follow what they are told. This is, I believe, an amazing point that is being made. To quote a superhero: "with great power comes great responsability" (which I'm dedicating to Becky the Bookette who is a fan! ;) ). The twins understand the extent of their yet to be discovered powers and want to use them for good and not just as a mere instrument to someone else's will. Nicholas Flamel included.
Dangerous situations are definitely not scarce when they set foot in London. Now that the Dark Elders are convinced that Josh and Sophie are the Twins, they have started to gather to return to Earth. Many creatures await the trio in London and hunt them thanks to the distinctive silver and gold auras of the twins. All those creatures are brilliantly described by Michael Scott, especially the Archon Cernunnos who was present on this planet even before the Elders. Each character has a very moving story through the centuries and it is always an amazing discovery that awaits the reader.
My heart has been taken by the character of Gilgamesh the King. I won't write anything here, but what a beautiful and heart-breaking story his is. I can't wait to read more about him, if he will come back in the next books. All in all, I am literally amazed at the world created by Michael Scott and many character's stories will stay with me for a long time.
But the book is also mainly about Perenelle, held prisoner on Alcatraz - hence the title. She is said to be much more powerful than Nicholas Flamel, and she is the one feared by Elders, Next Generation and other species alike. Single-handedly, she overcomes all that is thrown her way with uncanny brilliance. Her fight is the most amazing parts you will read in this book. The Sorceress rocks!
I cannot even describe how breath-taking this series is. The mythology created by Michael Scott is unbelievably rich and fascinating. I keep wanting to know more about what happened before humans set foot on this planet and I keep asking myself, how the Twins will use their powers. As soon as I finished reading The Sorceress, I started reading The Necromancer. I am addicted to this series, and I am sure you will be too!
The giveaway is on the review of The Alchemyst here.
Thank again to Corinne and Random House for making me discover these amazing books!
Published by Caroline