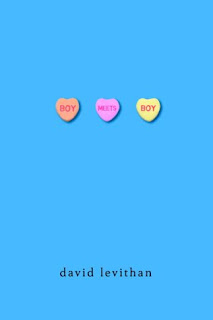 Publisher: HarperCollins Children's Books
Category: YA
Release Date: 2006
Source: Bought in Waterstones
Paperback : 185 pages
Summary from Amazon:
Love meets love. Confusion meets clarity. Boy meets boy. "There isn't really a gay scene or a straight scene in our town. They all got mixed up a while back, which I think is for the best! And whether your heart is strictly ballroom or bluegrass punk, the dance floors are open to whatever you have to offer. This is my town." Meet PAUL. Gay his whole life, and finding love as wonderful, confusing and heartbreaking as every other teenager in his high school. Meet Paul's friends: JONI -- his best friend, who may not be his best friend any more; TONY -- his other best friend who can't leave the house unless his parents think he's going on a date! with a girl; INFINITE DARLENE -- homecoming queen AND star quarterback in the football team; KYLE -- the ex-boyfriend who won't go away; RIP -- the school bookie who sets the odds; And NOAH -- the boy who changes everything. Witty, engaging, refreshingly upbeat and slightly surreal, David Levithan's debut has been attracting glowing reviews in the USA. After all, being in love at high school is a challenge for any teen -- regardless of sexual preference!
~~~~~~~~~~
This book is a breeze of fresh air in the recent books I have read. It is extremely sweet, fun and original. I don't know exactly what I was waiting before reading the book, I had read some good reviews and thought it would be a fun love story, but it ended up being much more original than that.
The narrator Paul lives in a town where there is no discrimination against people's sexual orientation. The LGBTQ and the straight crowds have mixed several years before and you can see the utopic city where everyone is respected even Infinite Darlene the homecoming queen and star quaterback of the football team of Paul's high school. I loved reading about this, it represents such a change from the less positive and optimistic LGBT books.
Paul's voice in the book grips you from the first page and you share his emotions as the story evolves around him, his friends and his love interest Noah.
The story is about that moment in life where you meet someone and you know. You know this isn't like anything you have encountered before. You know this is the real thing. Or maybe not. Though it looks like it. Your entire life gets attached to that person and it makes you the happiest you've ever been in years but it hurts and scares you so much at the same time. Not that I know the feeling.  :-D
I absolutely loved reading about Paul and Noah. Their feelings, their doubts, their fears, their hesitations and certainties. It was just extremely swoon-worthy and cute.
I liked all the characters. I feared it might look like an accumulation of stereotypes, but all the characters felt real to me. As real as they would be in this utopic society where they wouldn't have to justify their existence to the others and could live openly. They don't have to hide themselves and their feelings cease to become an issue: they feel attracted to others, they have doubts, they try, they realize their preferences, and they can do all that in a peaceful environment.
At the beginning of the book I felt that Paul was more a narrator than a character so to speak, but his personality emerged through the story. Even though the story talks a lot about being gay and coming out, it is first and foremost a love story between two characters and their journey towards this love.
I particularly enjoy the character of Tony. He lives in another town and goes to another school which isn't as open-minded as Paul's. His parents are devoted Christians who feel that homosexuality is the work of the devil. He is an extraordinary character. I loved all the moments where he showed his courage and sensibility.
I don't even need to say anything on Infinite Darlene, she is absolutely wonderful (and definitely knows it).
I hate labels in general, and these ones in particular. It feels like you constantly need to add a letter at the end of LGBT to include everyone. This multiplication of labels doesn't have the result of making people more accepted in general, it just gives them a name and a group in which they can be recognised. As Paul says in the book, people love labels. I liked that the book presented the characters without having to label them automatically. They are all human beings - the other labels are superfluous.
I absolutely loved the artistic vibe there was in the story. I now want to paint the music like Noah and create origami flowers like Paul! The writing is beautiful especially in those moments. I liked walking with Paul through his city and share what he saw in it. I also liked following Tony in the nature where he likes to be alone.
This book literally took me by surprise. It is a very sweet and original read and the LGBT theme is presented in a very unique way through amazingly vivid characters.
The love story is so romantic... *swoon* :)
Published by Caroline