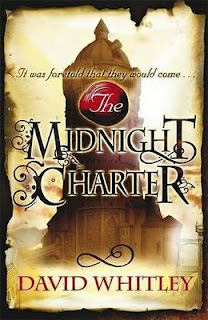 Publisher: Puffin Books
Category: Young Adult, 11+, Fantasy
Release Date: 2009
Source: Sent for review by Puffin
Paperback : 372 pages
Summary from Amazon:
In the city of Agora, anything can be bought and sold. Even children are possessions until their twelfth birthday. Mark has been sold by his father, and Lily, an orphan from birth, has bartered for her life. Thrown together by chance, in the ancient tower of Count Stelli, they face an existence of poverty and servitude, unless they can find a way to break free. But, unbeknown to Mark and Lily, they are being watched by the ruler of the city. Can they survive the traps and treachery that await them and discover the dark secret that binds them together? Their lives depend on this question: what is the Midnight Charter?
~~~~~~~~~~~~~~
I am absolutely amazed by this book. It contains a fantastically spooky setting, very interesting characters and some highly thought-provoking themes. I have started the second book in the trilogy, The Children of the Lost, as soon as I finished this one!
I can't tell you what the Midnight Charter is because that would be spoiling and that is just plain wrong (no, no, I am not hinting to you Mockingjay spoiler-morons).
We start the book with Mark, a young boy suffering from the grey plague who has been sold to a Doctor by his father. Not very surprising in a city where you can sell everything, including your children and your emotions. He meets Lily who is an orphan and has been sold to a book-binder by the orphanage. Together they will try to survive in the Agora.
The city of Agora lives in autarky meaning no one gets in or out of its walls. The organisation of Agora seems very real and is quite scary! There is the faceless Directory which controls everything and then there is what could be called the Judiciary branch (with a Lord Chief Justice) and there is Astrology which has a strong influence on people's lives. You never know who is a 'good' character or a 'bad', so you keep guessing until the very end, which is awesome!
The major theme in the book is the selling thing. It is one of the best books talking about materialism that I have read. Money doesn't exist in this story, you exchange something for something else, and it makes the transactions so much more vivid. It brings the reader very interesting thoughts and makes you look at your life and your own behaviour towards "things". To be honest, I was blown away. Of course, the book would have talked about the subject more accurately had it been aimed at adults, but I liked the simplifications in this one.
Lily, on the other hand, feels that this system is bad and corrupted. She wants to introduce a new way of thinking - charity. I love this duality present in the book, because saying "charity is good" or "charity doesn't solve the problem" etc. isn't what it is all about. To understand an issue, you have to start by asking the good questions, and I find that, throughout the book, Lily is giving amazing arguments but also asking the good questions to the Agora society.
The book would have been brilliant only with this. But it has so much more. I liked the characters and how they would make mistakes and maybe not even realise how far they have gone. I like Lily because she is a very strong female character and she doesn't let others dictate what she should do and what she should think is right. Mark is also an interesting character and his evolution throughout the book was amazing to read. All the other characters are very well developed and I found myself liking most of them!
I have to admit that I was a little confused with the age of the characters at first, I thought they were in their late teenage years whereas they were only 11 and 12 years old when the story begins. I can't help but wonder what 11 years old read in this book that contains many serious themes. Do they see as much as I do? Do they understand the debate as much as I do? I'm sure they do, and probably better than me.
It is also a book that can be read by girls and boys, which is rare enough to be noted!
The book may not be perfect, nor a masterpiece, but I was entirely taken by the story. The plot is very thought-provoking and challenges your convinctions on life, trade and charity. If you are a fan of fantasy and like to read a fascinating story as well as an interesting book, don't hesitate to discover this trilogy!
Thank you so much for Puffin for sending me this amazing book!
Published by Caroline