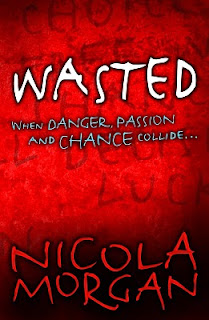 
Publisher: Walker Books
Category: YA
Release Date: 2010
Source: Sent for review and won in a contest organised by the amazing Sammee @ I Want to Read That
Paperback : 290 pages

Jack worships luck and decides his actions by the flip of a coin. No risk is too great if the coin demands it. Luck brings him Jess, a beautiful singer who will change his life. But Jack’s luck is running out, and soon the stakes are high. As chance and choice unravel, the risks of Jack’s game become terrifyingly clear. An evening of heady recklessness, and suddenly a life hangs in the balance, decided by the toss of a coin. In the end, it is the reader who must choose whether to spin that coin and determine: life or death.
~~~~~~~~~~
Wasted is one of those books you love to hate or hate to love. I loved some aspects of the story, and at other times, I just wanted to creep behind that narrator and hit him/her/it with a frying pan. So bad that I even considered not finishing the book. But I did continue and even though I didn't exactly like the book, I am glad I did read it in the end.
The story centres on the relationship between Jess and Jack. They are both musicians and they meet by chance at school and start becoming friends when Jack asks Jess to be the singer for his band for Prom. There is some serious chemistry between those two, and they soon develop feelings for each other that are more than just friendship.
But the book has a second level where chance and luck are questioned through the presence of that annoying narrator and what is called "Jack's game". Ever since he was a little boy, Jack was led to believe that chance doesn't exist and that people simply get lucky or unlucky*. That is why he flips a coin for it to decide what he should do, so that he isn't responsible for the decision or choice. That is Jack's game, whenever there is a decision to be made, he flips a coin to go in one direction or another.
The relation between Jess and Jack builds up because of their passion for music and their respective personalities. I loved how they interacted. The two characters are really well described and have very interesting lives. There is a lot of depth in all the characters, even though there aren't many overanalytic descriptions either. They also felt like real teenagers with many flaws and doing several bad things for some.
I was also very touched by Jess's family situation. I am sure that there are a lot of children taking care of themselves on their own and even having to take care of their parents as well. Jess's dad left them to go live in America and Jess's mom is an alcoholic. She is a very strong character and I was really happy to continue reading the story and discover more aspects of her personality.
One of the most important characteristic of the book is, for me, the narrator, who seems to take at times more space than the actual characters of the book. The narrator knew too much and was talking way too much. I know what you must think "How can the narrator of a book 'speak too much'?", but it really feels that way. It felt to me as if the narrator was chance or luck (or whichever you want to call it) personified, playing with its character puppets. I hated that narrator with all my guts. It made me feel as if the character had no choice or influence over their own lives and just played in someone else's game. A someone way more powerful than a mere human. It felt a little obscene sometimes, especially when two different chapters would be written with two possibilities and the reader could flip a coin to decide which was the version that would happen to the characters.
The book made me question my own perception of life. I am very passionate about being independent, and this book shows how completely irrelevant independence is. I seriously disagree with that. With independence comes responsability of your actions, they are the two sides of the same coin, and I didn't like how this responsability was sometimes surrendered knowingly to chance or luck by the characters. I don't want to write a lot about it, but I really didn't like that part of the story.
I was also surprised by the style, the book is written in the present tense, it definitely serves the story, but it felt highly unusual to me at the beginning.
I wouldn't say I liked this book, but it spoke to me and even brought some very extreme reactions. It is an interesting read and I feel that the story would have been less powerful had the narrator been more subtle. It is also interesting to challenge your own beliefs and opinions. It is a very unique book, I would advise it to people who like challenging and original books.
Thank you to Walker Books for sending me this book and Sammee for organising the giveaway!
* I found it funny because in French, "luck" translates as "chance". It is interesting to see the emphasis put on the difference between the two concepts.
Published by Caroline