A few months ago, I went to visit The Italian Bookshop situated in a tiny street next to Charing Cross Road and I was amazed: the people are adorable, there are many books for children (downstairs) and a large variety of books translated in English! I am not regretting any of the books I have been advised, so don't hesitate to check it out if you want to discover Italian writers! 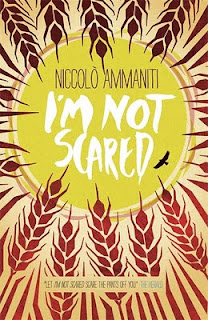 
Summary from Goodreads:
Ammaniti is one of Italy's most acclaimed younger writers, and this carefully constructed thriller is the first of his books to appear here. During a piercingly hot summer, a few kilometres from a bone-dry hamlet in rural Italy, a shy, nervy, nine-year-old boy called Michele explores a derelict house and discovers, under moldering leaves, a horrifying secret. The novel is saved from sensationalism by Ammaniti's almost cinematic ability to conjure detail—the look of scraps of meat on a plate, the sheen of a new bike, the whispers of adults in the night—and by his utterly convincing re-creation of a child's perspective, as Michele's discovery propels him into ever more uncertain territory.

The book takes place in the countryside in the South of Italy. Ammaniti is absolutely brilliant at describing this tiny village next to the small town of Acqua Traverse. The reader can really feel as if they are right there with the characters during this scorching hot summer.


Historical background of the story:
You have to know that Italy is a divided country between North and South. The unity of the country was 'only' brought in the 1870s, and, other than differences in terms of idioms (in some rural parts of Italy, the local idiom is used more than the Italian language by the population) and culture, the North and the South are divided economically and, thus, socially and politically.
With the Industrial Revolution, the North became quickly very wealthy and didn't see with a good eye the redistribution of wealth to the poor agricultural South. Several decades later, this hostility is still patent. The book is set in the 1970s, where corruption and criminality was still very high.
I am not telling you all this to bore you to death (no really, I don't!) but because this poverty, especially in the South of Italy, is the background of this story.


The story:
Michele Ammitrano (9 years old) lives in a very poor village in the South of Italy, all the adults of the village have to go to work in the North or in a big city outside the village to survive and provide for their families. They might not like each other, and even bad mouth one another, but all the families are there in the same boat, so they help each other out by giving food, clothes and exchanging what they can.
The kids of the village all play together. They are very poor and even second hand toys and bicycles are a luxury, they mainly play outdoors with stray dogs or invented games. They have all very different personalities, and, in other circumstances, they would never be friends. But they are stuck together in this small village in the middle of the summer without a pool or a lake to cool themselves.
One day, Michele loses a race and has to climb in an abandoned house. While jumping out a window on a tree outside, he falls on a mattress which is put on top of a hole to hide it. Michele looks inside. The hole isn't empty, and what he will find will change his life. At first, Michele doesn't talk about what he found to anyone. But in a small village, there is only so much you can hide.

The style of the book:
The style is uncharacteristically very fast and gripping. Italian is a very rich language you can play with for several lines without feeling the need to end the sentence. In this book, the sentences are very short and straight to the point. They make you sit at the edge of your chair, turning frantically the pages to read the end. The end which you will probably find disappointing - all this tension for a cliffhanger, REALLY?
The setting is wonderfully described and the characters are very well brought up to the story and are very typical. Michele's mother is the real "Mamma italiana" who is, in turn, as ruthless as a pittbull and as sweet as an apricot pie in the sun. (*cough* Hi Mum!)
The poverty of these people is very cleverly shown and only picky idiots persons like myself could write paragraphs and paragraphs on it :)


The story is very, very dark. Just so you know, this was published as an adult book in Italy (and UK) at first, but it has now been given a new cover in the UK and has been put in the YA section.
It is hard to say that this is a beautiful story, considering the gruesome details which are not spared to the reader. The subject isn't very happy-making either, but the realism and the ideas behind the story are definitely worth your chills.
I wouldn't advise this book to the younger young readers nor the faint-hearted.


Language corner:
As the sentences are very short and straight to the point, a person with an intermediate level of Italian could read the book.


Where to find it in English:
UK: Amazon, Waterstones, WH Smith
US: Amazon, Barnes and Nobles