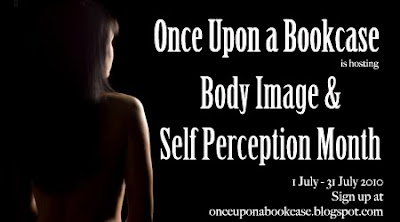 Hello readers!
I hope you are all doing fine and that the summer is looking like you'll be able to chill and read as much as you'd like!
I apologise for my constant absence of the blogosphere these past weeks, work has been literally crazy and I have just enough time to be sleep-deprived :) I can't believe I received a million cool books and haven't been able to post an IMM... The next weeks look better though and I'll finally be able to read more than 2 books a week!!! Wouhou!
Anyways! I will now continue my participation to the Body Image and Self Perception Month hosted by Jo at Once Upon a Bookcase with the book Deenie by Judy Blume about a young girl with scoliosis as well as a little paragraph from someone who has been through the same problems (who is none other than my sister :))! 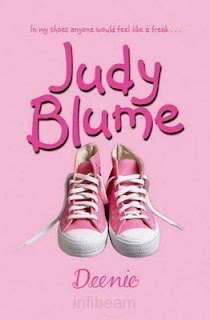 
Mrs Fenner has very fixed ambitions for her daughters. Deenie is 13 years old and gorgeous. Her mother wants her to be a model – but Deenie's not so sure.
So when she's diagnosed with scoliosis – curvature of the spine – Deenie's almost relieved. No more traipsing round modelling agencies, no more living up to her mother's expectations. But she has to wear an ugly, uncomfortable back brace for the next four years. And she's convinced that it will put an end to normal teenage life – including her blossoming relationship with Buddy Brader . . .

~~~~~~~~~~~~~~
The only reason why I chose this book is because my big sister has had a serious case of scoliosis and had to wear a brace for a while, and since it is hereditary I was regularly checked for it. Though it's not a very talked-about condition, it is quite common.
The story revolves around 13 year old Deenie who is being bossed around by her mother to become a model. She had had a few comments about her posture by model agents and after some exams, Deenie is diagnosed with scoliosis and needs to wear a brace for 4 years.
I found this story very touching and sweet. Judy Blume takes a fairly overlooked theme - scoliosis - and builds this story about Deenie that isn't just about back problems. The story is told from Deenie's point of view and I found that it showed the anguish that goes through a young girl when she goes from childhood to her teenage self.
For as long as she can remember, Deenie has been considered by her mother the Beauty and her big sister Helen the Brain. From this simple constatation, Deenie's life has been predestined to modelling by her mother's expectations and Helen to academics, to the point that Helen would be chastised to do her homework and no one cared if Deenie did hers.
More than talking about the issue of scoliosis and body image, the book talks about the opinion of others on one person and how their attitude shifts depending on that opinion. In clearer terms, Deenie's mother is guilty of ruining her daughter's life because of her archaic vision of life. This is the polite version by the way.
I most entirely hated the character of the mother, I mean, how can someone be so blind? And I liked how her character was balanced by Deenie's father who actually cares about his daughter and believes her health and well-being are more important than modelling.
Sometimes you think that the kids are the ones obsessing on their physical features, but I believe that a healthy family environment actually helps soothe those obsessions. Here, it is the contrary, Deenie's mother makes it harder for Deenie to cope with her brace. Thankfully, her sister, her father and friends make her think that there are more important things in life.
I found it interesting how Deenie is afraid and sometimes disgusted by people with medical condition, like a woman with a bump on her back or a girl with eczema in her gym class, I found that her entire process of understanding of others' conditions actually helped her understand her own.
I liked the fact that Deenie wanted to make something of her life with her brain and not just want to make a living on her body. That's exactly how it should be :)
This book is very sweet and I believe is targeted to the younger audience of the young adult readers (11-15 years old), but I think that some parents should read the book because their "wanting the best for their children" sometimes is counterproductive. Just saying.
~~~~~~~~~~
Since I reviewed this book as part of the Body image and Self Perception Month and that the aim of this month is to talk about those problems rather than keep them bottled up inside, I have asked my sister Audrey, who suffered from scoliosis and had to wear a brace, to write a little paragraph on how she felt and how it was perceived. I translated it from French, so excuse the poor quality of it!

When the doctor announced that it would be either an operation or a brace, I was speechless and mortified. It was horrible news to me. At 14 years old, wearing this thing was impossible. The process began, I couldn’t do anything else than undergo it. Always the same questions: why me? why life would make me go through this? Didn’t I go through enough already? The day arrived where my mother and I went to the paediatrics part of the hospital, decorated with the brightest colours, as if nothing serious would happen. When the secretary brought us to the room, my heart crumpled. They had to mould my abdomen and it was painfully hot, but because of the pain I was obliged to wear at least two shirts under the brace. I was at first worried about announcing this to my middle school friends, but I was pleasantly surprised by their understanding. They immediately nicknamed me Robocop and were impressed by my iron abs which they would playfully hit. There were many constraints to wearing the brace (heat, excess laundry…) but I actually keep a good memory of the whole thing since now my back is straight and I am less in pain. I believe that there are worse things in life, especially when you are sitting in the paediatrics aisle of the hospital where scoliosis is hardly a problem compared to the others.