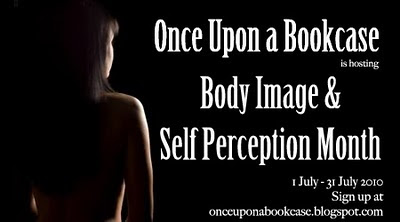 Hey again people!
After my small Intro post to the Body Image and Self Perception Month, I am now writing my first review on the subject!
If you have no idea what I'm talking about or would like to know more about the whole thing, you can read my Intro post here and Jo's presentation of the Month here.
I am kicking this month with a book that is also part of my LGBT Challenge 2010. 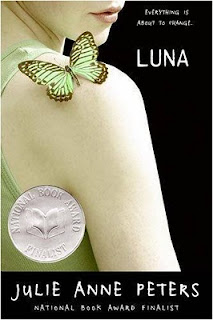 Summary from Goodreads:
For years, Regan's brother Liam has been nursing a secret. By day, he is Liam, a passably typical boy of his age; at night, he transforms himself into Luna, his true, female self. Regan loves and supports her brother and she keeps his Liam/Luna secret. Things change, though, when Luna decides to emerge from her cocoon. She begins dressing like a girl in public; first at the mall; then at school; then at home. Regan worries that her brother's transgender identity is threatening her own slippery hold on normalcy.
~~~~~~~~~~~~~~
I have most entirely fallen in love with this book and will soon take all Julie Anne Peters books from the library to discover all the other fascinating character she came up with. I find that she deals with such a sensitive subject with a lot of understanding. Her writing is simple yet very profound and all the characters in the story seem genuinely real.
Throughout the story, you realise that Regan has known her "brother" Liam was a girl ever since she was a young child, and has always thought of Liam as Lia Marie and then Luna. Through Regan's eyes, we witness Luna's constant struggle to keep the illusion of Liam and restrain herself from being who she really is. It is really well shown in the book how lifeless Liam is when Luna is just burning to live her life. Luna continues to pretend, withering away more each day as Liam, until the one point where she can no longer and outing herself is the only solution and truly a matter of life and death.
I was also deeply touched by the character of Regan. Such pressure has been constantly put on her tiny shoulders for years. When someone is discriminated, his entire family, friends and acquaintances receive the aftershocks of such feelings. She is being literally sucked in by Luna and her misery. I found it as interesting to witness Luna going out of her shell as Regan coming out of hers.
I loved the love story building itself between Regan and Chris. It is so sweet to see those two stumble on each other *awkward & clumsy people rule*. I also liked the fact that everyone has issues and that every families has something that isn't perfect, and that's just why there isn't *a* definition of perfection or normal.
I liked the distinction that has been made between transgenders and gays: Regan insists that Liam isn't gay, he is a woman trapped in a man's body. It is such a beautifully written book that I believe it is a classic story for the theme of transsexuality.
I liked also the importance the book gave to transsexual associations who play such a great role for those wanting to make the transition (i.e. changing sex), because it is not an easy nor short process. My roomie who is a nurse (in the UK) told me that patients had to follow psychological examinations for several years before being granted the right to change sex.
I reviewed this book for the Body Image and Self Perception Month and this book is the perfect illustration of self perception vs the perception of others of one's body. Luna has always felt woman but everyone else only sees Liam and each time Luna tries to be herself, she encounters mountains of misunderstanding and hate.
I believe that persons who don't understand transsexuals should read this book. It is a powerful story which shows what it feels like to be born in the wrong body and the effect the rejection has, not only on the person, but on their families and friends. And understanding is the key to accepting, no matter what the subject is.
Published by Caroline