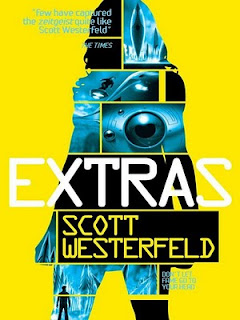 
It's a few years after rebel Tally Youngblood took down the uglies/pretties/specials regime. Without those strict roles and rules, the world is in a complete cultural renaissance. "Tech-heads" flaunt their latest gadgets, "kickers" spread gossip and trends, and "surge monkeys" are hooked on extreme plastic surgery. And it's all monitored on a bazillion different cameras. The world is like a gigantic game of American Idol. Whoever is getting the most buzz gets the most votes. Popularity rules.
As if being fifteen doesn't suck enough, Aya Fuse's rank of 451,369 is so low, she's a total nobody. An extra. But that's just until she gets to kick a good story for herself.
Then Aya meets a clique of girls who pull crazy tricks, yet are deeply secretive of it. Aya wants desperately to kick their story, to show everyone how intensely cool the Sly Girls are. But doing so would propel her out of extra-land and into the world of fame, celebrity...and extreme danger. A world she's not prepared for.

This book is set three years after the end of Specials, in another part of the world. I cannot review it without giving spoilers for Uglies, Pretties and Specials, BUT unlike the other books, this one can actually be read as a stand-alone novel if you don't wish to read the three others.
Though you are highly recommended to read all of them!

I have to admit to a major book crush here.
*has little hearts coming out of her ears just thinking about it*
The story is set in Japan three years after the "mind-rain", where Tally succeeds in beating the whole bubble-head system (end of Specials). The book revolves around different characters and a different culture. You can see the cultural differences between the future (them) and the present (us!) as well as between American cultures (Tally and co.) and Japan culture (Aya and co.) in the future societies. That sounds a tiny bit complicated lol. Aya's society is filled with references to manga (which is super fun!): the beauty standards are very different from the ones in Tally's city.
Aya is a young insecure Ugly who has issues finding her place in this fame/reputation-based system of society. People are ranked according to their fame and what they do. They each have a "feed" on which everyone can tune in. This is how their society works, so when Aya finds this group of extreme girls seeking thrills and wanting to disappear from the system, it makes her whole vision of the world change. Why on earth would people search to be invisible?
I feel that this book presents everything that is wrong with the media and the new forms of communication today. It is incredible that this story is supposed to happen in a far future and it feels so true when you look at it from a contemporary perspective: this race towards fame, towards scoops which aren't, this fear of invisibility and irrelevance in the world, sound familiar?
When you look at what type of persons are the most famous in the book and you look at who is famous in real life today, you choke on your chinese noodles. I just ate chinese noodles.
People can tell you the first name of one if not all of the Kardashian sister, but can they tell you who is the United Nations' Secretary General? It is Ban Ki-Moon, he is Korean (South Korea since North Korea is an evil Rogue State) and he hasn't done much to save the world "yet" (hopefully) in case you contemplated googling him. I don't need to write the names of the sisters though, do I?
My point exactly.  And I don't need to google their names either btw :D
I'm picking the Kardashians because they're particularly famous for doing nothing, but you just have to watch TV/Internet and take your pick.
I like the difference between Tally and Aya and their perspective on being famous and acting to be famous or just wanting to do something. I guess one feels always attracted to what they don't/can't have. It was fascinating to read about their differences. All the characters in this book were fascinating, from Aya, to the Sly Girls, to Aya's brother Hiro and his friend Ren.
Aya is constantly followed by a camera (called Moggle - I have a major crush on that hovercam), and she always acts with the idea in her head of a) being filmed for something awesome she does b) putting the images on her feed c) become famous and recognised by people. How boring and shallow, yet, how very natural to want to feel alive? Because, are you really alive if no one knows about your existence?
Oh dear, am I overthinking things again?
I loved how Tally looks so much more like an adult character, far from her own self in the three previous book. I found that it was such a brilliant way to conclude the Uglies' trilogy because no matter how important a revolution is, the crucial part is always reconstruction. It is easier to destroy something than build something else anew. The conclusion of this shows how scarred the world population is by what happened in the past which I won't talk about not to spoil the end!
I LOVE the character of Frizz. He has had a brain surge to make him unable to lie or even conceal the truth. He is entirely unable to deceive anyone. On one part, the clashes with other people because of his radical honesty create some hilarious moments in the book. On another part, it makes you wonder about your own life full of little white lies or even complete fabrications. Can one live by being entirely truthful and not end up alone? It offers quite a perspective on life. I found that Scott Westerfeld created this brilliant character to make us reflect on our own lives even more. Which I find awesome to be honest, life wouldn't be as much fun without some questioning!
Here the self perception is seen through the perception of others, in the sense that your perception of your own self isn't yours, it is decided by external criterias that you can't manage. How very 21st century of Scott Westerfeld to put that in a Japanese perspective to show us our flaws. I love this guy :)
I like the note that Humanity (the Rusties) didn't only create bad things.
This is a book that I won't forget. I loved all the books in the series, but this one in particular has a little something that is utterly irresistible. It is the type of books you love to read for the action and the plot, but also because it offers such a big reflection on society and human behaviour. And that's just how I like my books.
This is the end of my Scott Westerfeld Week, part of the Body Image and Self Perception Month hosted by Jo @ Once Upon a Bookcase, I hope you enjoyed it and want to read plenty Scott Westerfeld books now!!
Published by Caroline