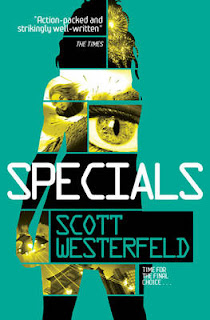 "Special Circumstances" - These words have sent chills down Tally's spine since her days as a rebellious Ugly. Back then Specials were a sinister rumour - frighteningly beautiful, dangerously strong, breathtakingly fast. Ordinary pretties might live their whole lives without meeting a Special. But Tally's never been ordinary...Now she's been turned into one of them: a superamped fighting machine, engineered to keep the Uglies down and the Pretties stupid. The strength, the speed, and the clarity and focus of her thinking feel better than anything Tally can remember...most of the time. One tiny corner of her heart still remembers something more. Still, it's easy to tune that out - until Tally's offered a chance to stamp out the rebels of the New Smoke permanently. It all comes down to one last choice: carry out the mission she's programmed to complete, or listen to that tiny, faint heartbeat telling her that something's wrong... Either way, Tally's world will never be the same.
~~~~~~~~
Specials is the gripping conclusion of the Uglies' series. Yes, there is a fourth book, Extras, but it is set after what goes on in Uglies, Pretties and Specials. Again, I cannot review Specials without writing spoilers about both Uglies and Pretties, so if you haven't read these books, head to my review of the first book (here) or second book (here).

By now you must have understood that the titles of the books are linked to Tally (and also Shay)'s condition: in the first book she is Ugly, in the second Pretty and in the third Special.


This new book finds Tally transformed in a Special and wanting to take revenge on the Smoke and the Smokies for what they did to Zane. She appears extremely different (physically as mentally) from what she was in the previous books. Her life takes a complete different turn when she is not, for once, hunted by Dr Cable. She is working - willingly - for her.


I have to admit that I was a bit shocked at the whole"Cutters" thing which started at the end of Pretties. Because Tally didn't give her the pill to cure the lesions induced after turning Pretty, Shay has resorted to cutting herself to reach a state of awareness and has created a clique - the Cutters - where people cut themselves to stay bubbly. They become Specials after Dr Cable notices what they do. Tally is obliged to become one of them at the end of Pretties. So in a big part of Specials, the characters justify cutting themselves by wanting to be stronger and have a clearer head. That is hardly a message I would send to Young Adult readers - hence my shock.
But as most things in Scott Westerfeld's books, this is part of the story for a reason. And I found that the reader would - for once - not follow Tally in this new life. I was highly horrified by her attitude, her determination in cutting herself as well as her lack of feelings. It felt as if the example of Tally, Shay and the Cutters, was just a way to show what a bad example they were.


After reading this book, I felt the same as I did about Frodo Baggins when I finished reading the Lord of the Rings. These poor characters just want to have a normal life, and that cruel writer behind his desk is making them go through all these events, scarring them for life.

*Poor sweethearts!*
I felt so bad for Tally during the entire book. After her transformation from Pretty to Special, the reader realises that something is not right in Tally's head. Specials are supposed to be bubbly and not airheads like Pretties. But Tally is bubbly to the point of being "icy". All the Specials are icy, this is the new slang for cool or bubbly in Pretty vocabulary. Though she thinks no one has messed up with her brain, the reader realises that someone did, because she has all the wrong reactions.


I was heartbroken by the evolution of Tally's relation with Zane. Unlike Tally, Zane has stayed pretty and brain-damaged. She is plagued by his weakness and his infirmity, she cannot even stand to look at him though she knows that deep down she loves him (she knows this, yet she doesn't feel any of it).


There is also a change in Shay and Tally's friendship. They become friends again, after the little episode at the end of Pretties but it is a forced friendship from their position as Cutters.


I liked how violence and education are related in the sense that when you educate people, they don't feel the need to be violent (expressing their opinions with non-violent tools). But also in the sense that you can educate people to violence. It is quite a thrilling issue, especially when Tally comes across a colony of "wild men" in Pretties.


All in all, I have fallen in love with Scott Westerfeld's storytelling and ideas. And especially with this series. It is beautiful with amazing stories between characters, plenty of action and above all, some very profound ideas coming through. I am a fan and I believe a lot of people would fall for Tally and her adventures!
Published by Caroline