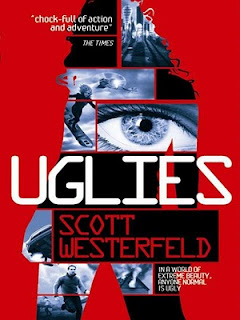 Publisher: Simon and Schuster
Category: YA
Release Date: 2005
Source: Bought in Waterstones!
Paperback : 425 pages
Summary from Amazon:
Tally lives in a world where your sixteenth birthday brings aesthetic perfection: an operation which erases all your flaws, transforming you from an 'Ugly' into a 'Pretty'. She is on the eve of this important event, and cannot wait for her life to change. As well as guaranteeing supermodel looks, life as a Pretty seems to revolve around having a good time. But then she meets Shay, who is also fifteen - but with a very different outlook on life. Shay isn't sure she wants to be Pretty and plans to escape to a community in the forest - the Rusty Ruins - where Uglies go to escape ' turning'. Tally won't be persuaded to join her, as this would involve sacrificing everything she's ever wanted for a lot of uncertainty. When she is taken in for questioning on her birthday, however, Tally gets sent to the Ruins anyway - against her will. The authorities offer Tally the worst choice she could ever imagine: find her friend Shay and turn her in, or never turn Pretty at all. What she discovers in the Ruins reveals that there is nothing 'pretty' about the transformations...And the choice Tally makes will change her world forever.
~~~~~~~~~
I was most entirely blown away by this book, and I have already started Pretties, the sequel in the Uglies' series. What an incredible story!
The story takes place a few hundred years after our civilisation. Us humans of the 2000 are called "Rusties" and are criticised for our inability to live together by accepting our differences and our ruthlessness in destroying our planet (that is not the part of Scott Westerfeld's brain that deals with imagination which came up with this, in case you wondered). The new civilisation is basically divided between Uglies and Pretties (there are other types of people, though). All human beings are born Uglies.
After a phase as Littlies living with their parents, the Uglies live in dorms together until their 16th birthday where they undergo a surgical operation to become Pretties. I hope I didn't lose anyone here. All Pretties are very similar and they fool around in New Pretty Town by going to parties, playing tricks and getting drunk. I know it sounds familiar but it isn't set in LA and the characters aren't brainless fashionistas.
This being said, we have our badass heroine Tally Youngblood, who is a few months away from being a Pretty and - finally - start her life. Her best friend Peris has been transformed and she can't wait to join him. Being a Pretty is the most important thing in Tally's world. When she meets Shay, she realises that not everyone fancies becoming a Pretty, and it makes her question her own self. When she has to go after Shay and bring her back, she will discover what is true and false in this Ugly/Pretty world.
This dystopian world rocks! And yes, a world full of beautiful people living in peace is a dystopian world as opposed to a utopian world, wait till you read! Thanks to the numerous descriptions of the locations and the technology used in this new world, it is possible to picture the entire story. Scott Westerfeld's style is very visual so the reader gets caught up in the story from the start. By the way, I want a hoverboard for Christmas, I don't care if they don't exist.
All the characters are very well described and have amazing personalities. There is no inequality in this new world between men and women so none of the girls are weak or passive. Which is just *YAY girl power*!
Tally is amazing in her quest to be who she wants to be and have what she wants. It is hardly her fault if people get in the way. I loved her spirit and how mischief is her middle name. She is incredibly courageous and faithful to her friends. The most that she can, at least, by staying true to herself. I also like Shay who is just as strong as Tally. David (only character with a non-weird name) is a very interesting character in the series and I really liked how he was brought up to the story.
The Specials - Pretties but with special abilities - are scary but look awesome (in the evil kind of way).
What I particularly loved in this book is the fact that many serious themes are brought up in a very subtle way and don't even look serious behind the mischievious tricks and the action. But they are still present and make the Rusties that we are think about what we are doing. I am not going to give away what happened to the Rusties because it will be revealed in the course of the book, but it could happen people. Scary!
One of the theme I noted was the importance of recycling versus history. This might look weird put together, and how it should ever be opposed, but in this world, everything is created instantly and can be recycled just as instantly. When Tally gets to the Smoke where Shay has fled, she is surprised at seeing those old battered things and even more surprised at liking them. She says it better herself:

In the city, she'd owned lots of things - practically anything she wanted came out of the wall. But city things were disposable and replaceable, as interchangeable as the T-shirt, jacket, and skirt combinations or dorm uniforms. Here in the Smoke, objects grew old, carrying their histories with them in dings and scratches and tatters.

A world which tries to live in harmony with its habitat by recycling is one thing. A world without history is another.
I reviewed this book as part of the Body Image and Self Perception Month, hosted by Jo @ Once Upon a Bookcase and I find that the world created by Scott Westerfeld takes several issues from today's world and transforms them or talks about them in this new world.
Anorexia for a start is mentioned as a negative - ugly - disease where people (Rusties) stopped eating in a world overflowing with delicacies and even died of it. I liked that Scott Westerfeld's Pretties weren't skinny, it's quite a change.
Pretties have this fear of old age. Tally has a very strong reaction to an old Ugly. Old Pretties still look young and unmarked. A world without old people is also a world without history, so some themes find each other while talking about entirely different things.
Being Pretty is unnatural in this world. There is only one type of beauty accepted and everyone gets an operation to be this way. This is one of the dangers of a generalisation of some beauty standard to a systemic level. As evil as it sounds, it is actually boring. But that's just my opinion. Can you imagine a world where everyone looks the same: everyone is Pretty and no one is Pretty. Like I said, *boring*. But all Uglies are brought up to think they are all Ugly and that only Pretties are worth looking at. If they hadn't been brought up like that, maybe they wouldn't even care what they looked like.
*wink wink nudge nudge* today's society and the role of the media.
This book is extremely rich and interesting. The writing is amazing and you go through Tally's adventure with her, taking the blows when she takes some and coming up with the worse tricks when she needs to create mayhem. But the book isn't only an action-packed story with explosions and kick-ass characters. Some very strong themes are developed and each of them will resonate differently depending on the reader. It is an absolute must read.
All fans of The Hunger Games and dystopia in general should fall in love with this series as easily as a hoverboard jump without an iron source under *obviously you need to read the book to understand that*. But I would also advise it to the aficionados of a strong female main character, because you are getting one badass chick.
Published by Caroline