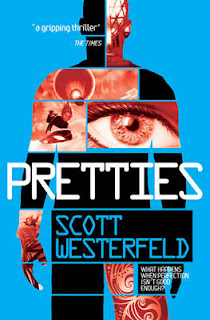 Publisher: Simon and Schuster
Category: YA
Release Date: 2006
Source: Library
Paperback : 370 pages
Summary from Amazon:
Tally has finally become 'pretty'. Her looks are beyond perfect, her clothes are cool, her boyfriend is totally gorgeous, and she's completely popular. It's everything she's ever wanted. But beneath all the fun - the non-stop parties, the high-tech luxury, the total freedom - is a nagging feeling that something is very wrong. Something important. And sure enough, when a message from Tally's 'ugly' past arrives, the fun stops cold. Now Tally has to choose between fighting to forget what she knows and fighting for her life...
~~~~~~~~~~
I can't review Pretties without giving away major spoilers for Uglies, so if you haven't read the first book, you can read my review here and go buy the book or take it from the library :)
I am reviewing this book as part of the Body Image and Self Perception Month hosted by Jo @ Once Upon a Bookcase, check out her blog for more info!

Pretties is the second book from the Uglies' series by Scott Westerfeld and let me tell you that it rocked my socks! I absolutely love this series and I find that Scott Westerfeld's story-telling is brilliant. If you liked Uglies, you're going to love Pretties!
The world he created - supposed to be our future in 300 years - is awesome. It is divided in small entities mostly isolated one from the other. These entities live in complete autarky, only the people in the highest spheres of power can come and go out of the zone as they please. Before 16 years old, all human beings live as "Uglies" in a certain part of their city, and at 16, when they do the surgical operation that will transform them in "Pretties", they go live in another part of the city reserved for the Pretties. Pretties do grow up and might even get a job and grow old, but that's hardly the point of the book!


From what we learned in Uglies (major spoiler, dude, don't read if you haven't read the first book), becoming Pretty isn't only a physical change, the evil doctors behind the operation also induce lesions in the brain in order to make people docile as well as Pretty by making them focus on their own pleasure and physical attributes and not think too much about the rest.
Tally is at first a real Pretty, she is concerned about what she wears and how she is perceived by others. But she has some moments of lucidity and it all becomes clear how just utterly boring and useless the Pretties are.


I liked that the characters are different when they go from Ugly to Pretty and that it is difficult to pass from one state of stupidity to another of awareness. Alongside attitudes, it is an entire language that comes with being Pretty. Things are bubbly (exciting or aware) or bogus (bad or boring). The world has only two dimensions: Pretty/Bubbly/Interesting/Worthy or Ugly/Bogus/Boring/Worthless. It is very interesting seeing the intelligent Tally from the first book evolve in this two-dimensional being. The brain-washing looks very real and you just want to put your hands in the book, grab Tally and shake her to make her realise what she has become!


At the end of Uglies, Tally leaves David without them having an explanation over that little betrayal thing she did which ended up killing David's dad. Oops. So when Tally recovers her intelligence and memories, there is a big question-mark on David. Will he forgive her? Will he not? Is he still Ugly alive? In the meantime, Pretty Tally becomes closer to another guy, Zane, who is as Pretty and bubbly (meaning aware) as her. Love triangle much?
I found that Tally's love life (if not life in general) is quite complicated. Poor thing. Everything she does ends up ruining her chances each time a bit more. I honestly hope some good will come out of all of it because, girl, that's some serious bad luck!


Tally and Shay's friendship evolves through the books. They follow the same route, but have very different attitudes towards other people and situations. I like to see how their friendship changes depending on their 'condition' (Ugly, Pretty...). I find both their personalities fascinating.


Like Tally, I don't like my life when I am not myself and everything is too easy peasy lemon squeezy. Don't you like some challenge or difficulty in your life? Don't you feel a bit suspicious when things are easy, as in way too easy to be true?
After a while, Tally realises that being a Pretty and an airhead is a bit... bogus! So she wants to think for herself and do what she wants without being constantly watched. I like this idea that when people have everything they need (and more), they stop getting involved in how decisions are made about their future. And this is *drum rolls* one of the biggest dangers in today's rich democracies. Argh, I knew it, I lost everyone on that one. As in, when people have the impression they are free, they don't take initiatives to check if they actually are. When Tally wakes up from her Pretty daze, she realises that no matter what comes magically out of the wall whenever she asks for something, she is not entirely free. Not free to do what she wants and not free to think what she wants.
Anyways, I felt it was an interesting issue to ponder, even in today's world where, luckily, we don't all look like Barbie and Ken :)
Or I am - like always - over thinking the whole thing!


I am much in love with this series, and I would love everyone to discover it. The book is very intense and the characters awesome. Scott Westerfeld has amazing story-telling skills and you get hooked on the story from the beginning.


Dystopia is becoming each book a bit more my favourite genre.
Hello Mockingjay ;)